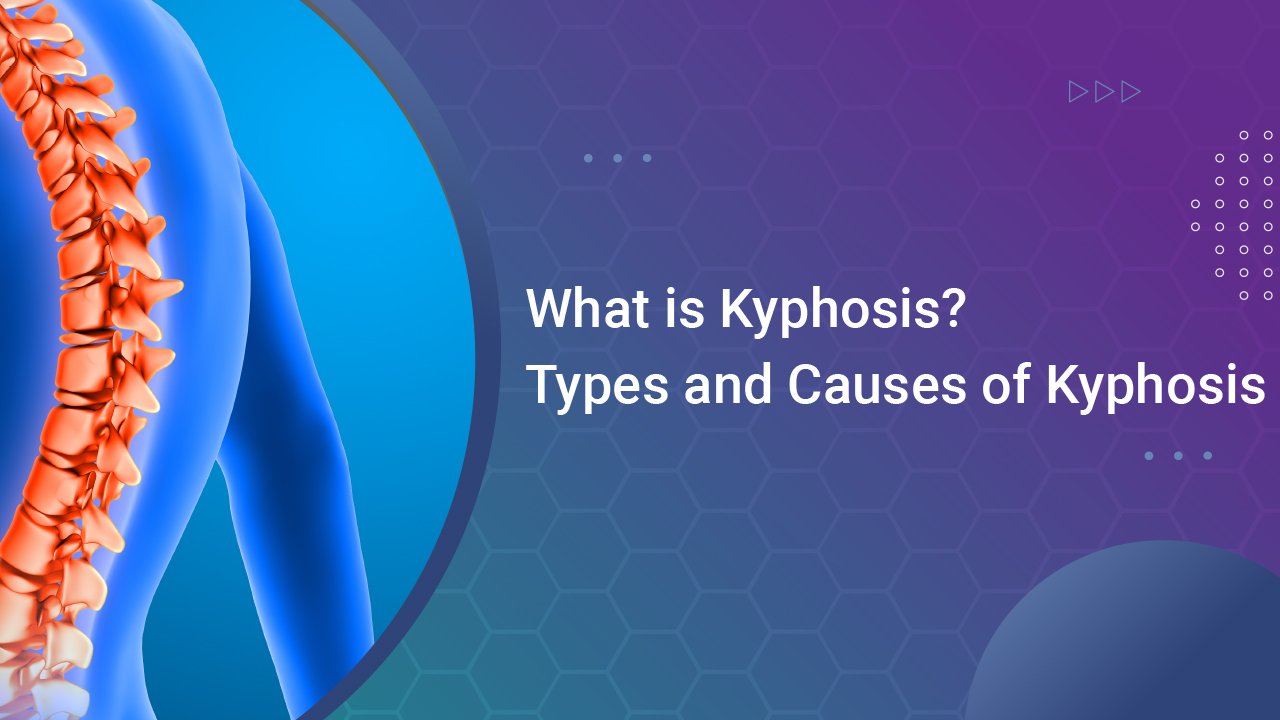 What is Kyphosis? Types and Causes of Kyphosis

Excessive forward rounding of the upper back is known as kyphosis. Kyphosis in older persons is frequently brought on by the spinal bones’ weakening, which leads to their compression or cracking. Other forms of kyphosis may manifest in children or adolescents due to spinal deformity or gradual wedging of the spinal bones. Mild kyphosis rarely results in issues. Severe kyphosis can hurt and be unsightly. The reason, severity, and age of your kyphosis will influence your treatment.

In this post, you will learn about the definition, causes, and many types of kyphosis. Continue reading to learn more.

A noticeable increase in the upper back’s forward curve is known as kyphosis. It’s usual to have a slight curvature. Doctors might need to step in if a person’s spine is unstable or painful due to an excessive curve.

Doctors refer to an extreme forward curve as hyperkyphosis or kyphosis. Kyphosis can be brought on by disorders associated with aging, postural imbalance, or spinal anomalies. Other than changes in the spine’s appearance, it might not cause any other symptoms.

Mild kyphosis could not cause any apparent symptoms or indicators. A slight kyphosis occurs naturally in the upper back. Excessive curvature may cause stiffness and back pain in the individual.

A noticeable forward curve in the top section of the spine is the leading indicator of kyphosis. It makes the shoulders round forward, and the upper back appears bent over.

The extraspinal bend is barely evident in moderate cases. Other times, a person could appear to be bending forward.

Kyphosis frequently happens in the absence of other symptoms. However, additional signs can include:

According to doctors, about 40% of patients with hyperkyphosis had vertebral fractures. Each spinal compression fracture has the potential to add 3.8 degrees to the kyphosis angle.

Types And Causes of Kyphosis

Vertebrae, the bones that make up the spine, are stacked on the other. The spine may be both supportive and flexible because of this arrangement. It also implies that the spine is susceptible to injury.

Different kinds of kyphosis exist. Depending on the type of person, many things might cause kyphosis.

The most prevalent type of kyphosis is postural kyphosis. It frequently begins in adolescence when postural imbalances such as slouching cause the muscles that surround the spine to develop differently. Slouching causes the spine’s posterior ligaments and extensor muscles to be stretched, weakening them over time. Slouching also increases the spine’s forward curvature. Because their muscles are weaker, elderly folks may also experience this.

Kyphosis is identified via a physical examination by a physician. The doctor may evaluate a patient’s balance and range of motion by having them undertake stretches or exercises.

Another typical examination has the patient lying down while the doctor looks at their spine. If the spine straightens out, it is flexible, and postural kyphosis is more likely to cause than a structural problem with the spine. A structural form of kyphosis is most likely present if the spine continues to bend.

The doctor might suggest an X-ray or MRI scan to look at the spine’s structure if they discover signs of an inflexible curve during the examination. When things get worse, they may order other tests, such as a blood test or a lung function test.

Treatment for kyphosis depends on the type of kyphosis and the severity of the curve. 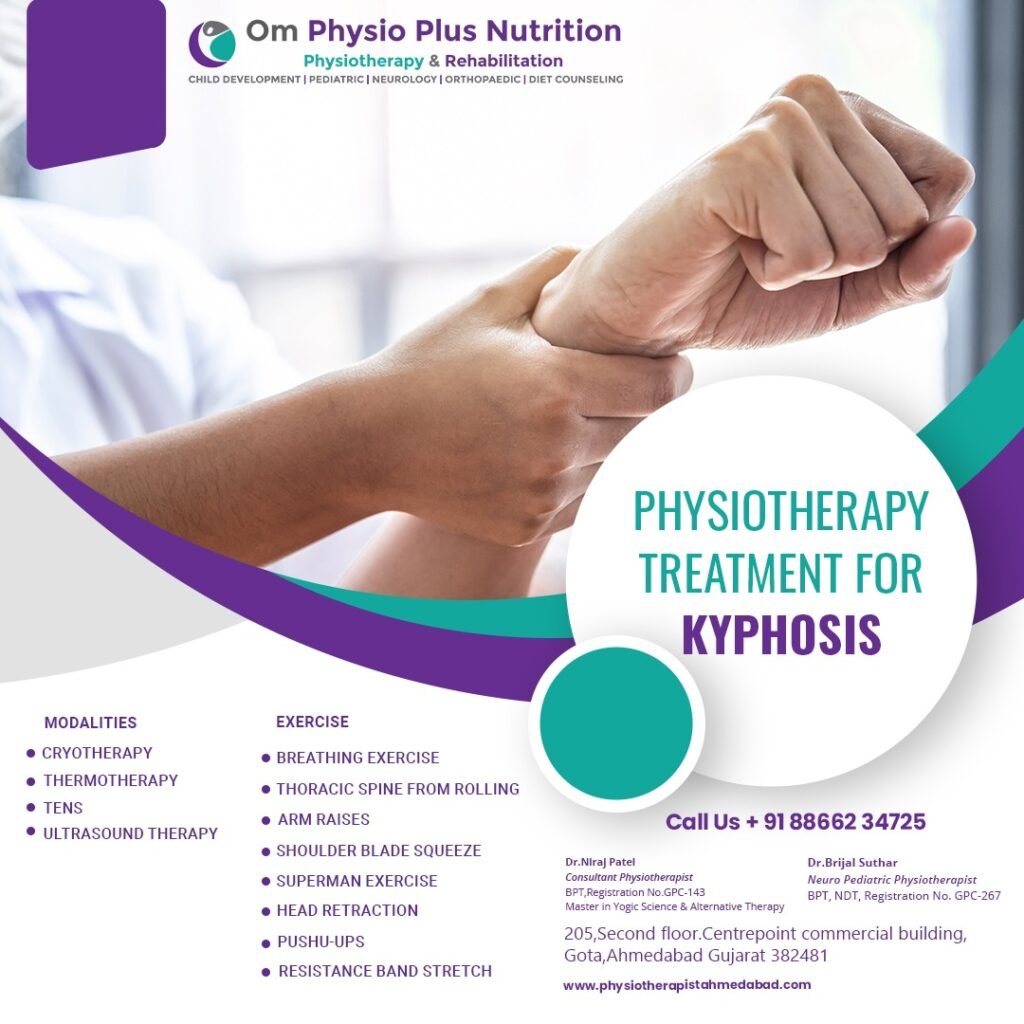 Nonsurgical treatment for postural kyphosis may aid in preventing the look of the curve from deteriorating. Those who have Scheuermann’s kyphosis may benefit from it as well if their spinal curve is less than 70 to 75 degrees.

Surgery may be beneficial for people with congenital kyphosis or severe Scheuermann’s kyphosis. Surgery aims to lessen the spine’s curve and any accompanying symptoms, such as discomfort.

Depending on the circumstances, a person may undergo different process types of kyphosis. Spinal fusion surgery is a regular procedure. To create a single bone section, many vertebrae are joined together by welding.

Rods, metal screws, and plates are inserted into the spine during additional surgical procedures for severe kyphosis. This aids in spine stabilization and raises the rate of bone transplant fusion. It may lessen the upper spine’s curvature.

Since these are extensive surgeries, doctors often explore nonsurgical solutions first, wherever practical.

In more severe cases, kyphosis complications can develop. These consist of:

Additionally, kyphosis can pinch or compress the spinal cord, harming the nerves that feed the legs and lower body. It may result in issues with balance, loss of bladder control, numbness or paralysis in the arms and legs, and more.

If a person with a spinal curve experiences these symptoms, they need to get help right away. A doctor could suggest surgery to unclog the spinal column.

There is a chance of problems after surgery to address kyphosis, such as postoperative infections and bleeding near the surgical site.

When to See a Doctor

If you observe an increasing curve in your upper back or your child’s spine, schedule an appointment with your doctor.